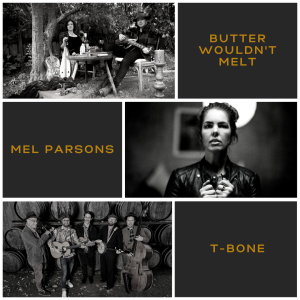 The winner will be presented with their Tūī at the 2023 Auckland Folk Festival on 29 January 2023.

Blending Americana and Traditional folk influences, Butter Wouldn’t Melt are nominated for their debut album 1931, with songs about important moments in New Zealand’s history, including ‘Eve of 31’, written about the Napier earthquake and ‘The Tunnel’ about the ghost of Wellington’s tunnel.

Their original material is presented with a unique blend of archtop guitar, dulcimer, whistles, double bass, bodhran and soaring countermelodies.

Simultaneously raw and familiar, their sound manages to fill each song with dancing harmonies and country and blues-inspired fingerpicking.

Award-winning singer-songwriter Mel Parsons is back with her new album Slow Burn. Mel is no stranger to the Aotearoa Music Awards previously a finalist in 2010 and 2012; her 2015 album Drylands won Lee Prebble and Olivia Harmer the Te Kaipukaha Toa | Best Engineer Tūī, and in 2020 her album Glass Heart won the Tūī for Te Kaipuoro Taketake Toa | Best Folk Artist.

With eclectic influences of zydeco, old-time, blues and bluegrass, T-Bone’s debut album Good ‘n Greasy brings some of the best-known folk musicians in Aotearoa together for the first time.

Good ‘n Greasy debuted at No.2 on the New Zealand Album Charts in June 2022, capturing the raw energy and magic that comes when these five exceptional musicians are on stage together.

T-Bone are also playing the Auckland Folk Festival this year. Catch them at 6pm on Sunday.

“With such a wide range of different sounds and styles coming out of Aotearoa, there’s never been a more exciting time to be a music fan, and these finalists are prime examples of this diversity,” says Owen.

Cancelled due to the pandemic in 2022, the Auckland Folk Festival celebrates its 50th year this year, and promises to be the biggest, brightest celebration yet. Held over Anniversary Weekend (27th – 30th January), Te Kaipuoro Taketake Toa | Best Folk Artist Tūī will be presented on the Sunday (29th) evening.

Tickets are available from http://aucklandfolkfestival.co.nz/