Announcing the finalists for 2021 Artisan Awards 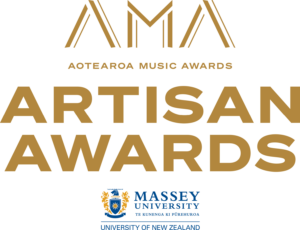 For the sixth year running, Recorded Music NZ and Massey University will celebrate the unsung heroes of Aotearoa’s music industry at the AMA Artisan Awards.

The 2021 Artisan Award finalists and winners will be celebrated in a pre-recorded showcase made at Massey University and released on TVNZ OnDemand.

The show will feature performances from Jaedyn Randell and Dream Chambers, The Nudge V Troy Kingi, and Ka Hao.

The five Tūi presented are:

“While this year has certainly had its challenges, it’s also been filled with success stories from Aotearoa’s music community. Everything comes together behind the scenes and we’re lucky to have some of the world’s best producers, engineers, designers, directors, teachers, managers and artists,” says Owen.

The Best Album Artwork finalists for 2021 are Amanda Cheng for her work on Wax Chattel’s Clot, Jaime Robertson, Matthias Heidrich and Andrew Spraggon for their work on Sola Rosa’s Chasing the Sun, and Frances Carter for TEEKS’ Something to Feel. All three album covers can be found here.

Joel Little is the third finalist for Best Producer for his work on Noah Kahan’s ‘Part of Me’, Jarryd James’ ‘Miracles’, Tate McRae and Khalid’s ‘Working’, Imagine Dragons’ ‘Follow You’ and Vance Joy’s ‘Missing Piece’.

The finalists for this year’s NZ On Air Best Music Video Content are Alexander Gander for Georgia Lines’ ‘No One Knows’, and Anahera Parata for Louis Baker’s powerful tribute to his late grandfather ‘Brighter Day’

Andre Ktori, Head of School, School of Music and Creative Media Production at Massey University says: “As always Massey University is proud to be hosting the Artisan Awards. Like so many in our sector, we have been challenged again with producing a live event this year but are pleased that our students, staff and industry whānau have all come together to create a show that acknowledges and celebrates the awesome talent here in Aotearoa”

This year, we will again be recognising the enormous impact music teachers have on the beginning of our homegrown talents’ musical careers and the foundation of their understanding.

Finally, the three nominees for Recorded Music NZ Manager of the Year celebrates the strong wāhine paving the way for their artists, with Cushla Aston, Lorraine Barry and NicNak Media’s Nicole Thomas and Paula Yeoman.

MMF Aotearoa chair Teresa Patterson says: “We’re so honoured to be presenting the 2021 Music Manager of the Year award with the Artisan Awards again. Our industry has taken such a massive hit this year, and music managers have been critical in helping our nation’s artists continue to create and their business to survive. This award allows us to recognise and appreciate all that hard work.”

The 2021 Artisan Awards are being pre-recorded at Massey University’s flagship recording studios in Wellington and will be available on TVNZ OnDemand at a later date.